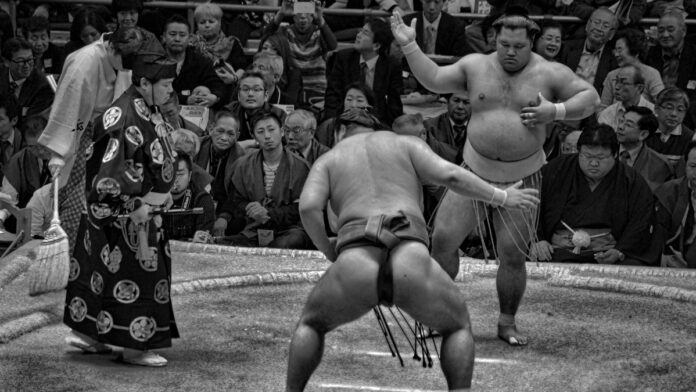 Japan is famous around the world for its love and skill in Sumo Wrestling, MMA (Mixed Martial Arts), Boxing and other kinds of combat sports. The Tokyo area has a great selection of live combat sporting events. Here is the Tokyo Sumo, MMA & Boxing Guide.

Sumo Wrestling is a traditional type of Japanese full combat wrestling, going back to the 16th century. Tokyo is the traditional home Sumo Wrestling in Japan. Sumo Wrestlers are known for their massive size and they might look extremely overweight. But don’t be fooled, they are impressively very strong athletes and they typically train 8 to 10 hours a day.

There are six major Grand Sumo Wrestling tournaments a year that occur throughout Japan, with three of the tournaments in Tokyo every year.

Japan is known as one of the birthplaces of Mixed Martial Arts (MMA). Japan is home to the once-famous Pride organization where fighters Fedor Emelianenko, Dan Henderson, and Mark Hunt all went onto become some of the biggest names in the sport.

MMA is very popular in Japan and Tokyo hosts many MMA events throughout the year. You can see many kinds of MMA, Kickboxing, Judo, Karate, and other combat sports events. The largest MMA promotions in the world UFC, Bellator MMA, and One Championship all stage global events in Tokyo.

In Japan, the sport of boxing came to Japan in 1854 with the first arrival of the American military. Boxing is a very popular sport in Japan, and the Japanese fighters excel at the lighter weight divisions. Japan consistently produces world-class fighters and they currently have several world champion fighters.