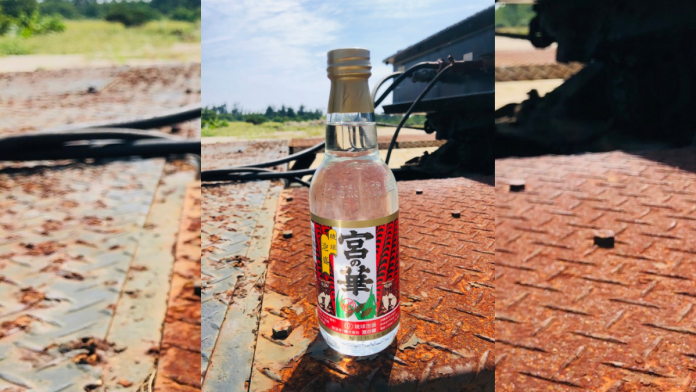 Convenience Store Literature is a compilation of stories, anecdotes, poems, and experiences by our reporter Simon.

A LONG WAY FROM EBISU ATRE

I left a beaker of grape juice out overnight. The next morning, two geckos were sitting in it, limbs bulging from drinking it. They both guiltily looked up at me through the glass.

I picked the beaker up and poured the contents into the sink. The geckos slid out on their bellies, and unhurriedly made off on grape-purple legs toward a crack in the wall.

Later that day, I had lunch at a Thai restaurant in Koza Music Town. The salad came topped with baby shrimp, fish sauce, red chili, peanuts, and coriander. A man with a cap on, long bleached blond hair, and a black t-shirt with a pair of breasts on it, swept the street outside a shop next door. Apparently, he did boob photography, the waiter told me. That was his thing. And in his shop were 400 photos of different women’s breasts.

I had tapioca for dessert, and a lady walked past, arms crossed over her chest.

I took a stroll near Kyoto University and it was quiet, just how my hangover wanted it. I followed a leafy path that wound through the grounds of a shrine. The path led to a road, shops. I found a 7-11, went in, and bought a noodle roll – fried noodles in a white bun – not bad. It wasn’t 11 am yet but a restaurant across the road had a line of people outside it. They looked like students from the university: young, scruffy, prone to laughter.

I walked over to see what the fuss was about. The menu at the door said they served two dishes – pizza noodles or basil noodles. A lady in a cap came out. She told me I could jump the queue and sit at the counter seeing as I was alone. Ok, sure, why not then, I said. Inside sat rows of students with their heads down chowing noodles – some red, some green. Easy street. I sat at the counter and ordered. Then a young man in a visor appeared and handed me some dice. The room went quiet. I threw the dice: clack clack clack.“A 3 and a 4!” shouted the man. The students cheered. I looked around, and one of them with a tie-dye t-shirt and tomato sauce dripping from his chin pointed at a board on the wall. The board said 7 had won me an egg. The diceman wrote ‘egg’ in kanji on a notepad, ripped off the paper, gave it to me, and the students went back to their noodles.

A plastic partition, almost touching my nose, separated me from the kitchen, and three chefs stood behind it, grinning. They stirred noodles into boiling pots of water and shouted orders at one another. More students came into the restaurant, and the chefs shouted Irashaimasse! The students sat down next to me at the counter, and the diceman came back. The room went quiet while they took turns to throw. One threw a double 6 and the whole place erupted. 12 secured the main prize. Chashu. Slices of braised pork belly. My noodles came and they were green. I gave the chef the egg note but he explained I could only get the egg on my next visit. Hey-ho.

For a student hang-out, the noodles weren’t bad. I finished them off and headed for the door. The lady with the cap opened it and the chefs shouted farewell. I walked back to the shrine path and belched, while a dragonfly swooped down and expertly landed on a blade of grass.

Around 2010, there was a regular at my local named Celine, a stocky fellow from Portland with slightly daft, blond mushroom-shaped hair, and a dolphin tattoo on his arm. He spoke French and English, plus he played acoustic guitar, and it was these things that softened his image because underneath was a nasty drunk. After the 6th or 7th beer, his eyes would roll back into his head and Hyde was in town, and matters naturally worsened when there were other drunks in the bar looking for bait.

He wasn’t the biggest guy around, but for brute natural strength, few compared, and he would often claim it was his Irish blood ( how much longer will we have to endure this line?).

Anyway, after a few drinks one night, and with some goons on another table offering up stuff like, ‘Celine’s a girl’s name’, or ‘ Celine’s so CUTE’, etc., his eyes began to swirl and his whole body shook. Next, his skin turned crimson and he karate chopped the 30cm thick wooden bar table the men were standing at, splitting it clean in half and spilling their drinks. Corny but impressive nonetheless – and you can still see the line in the wood today where the barman glued the pieces back together.

So one Winter evening, I came into the bar and Celine was standing at a corner table at the back reading a Kerouac novel, I forget which one. With glasses on and a full beard, he appeared older and calmer – think Jim Morrison in his later years.

I’d recently broken up with my girlfriend and needed a place to live, and it turned out Celine lived five stops away and had a room available. He said I could have it for 50,000yen a month, so I moved in a week later.

The apartment was small – a kitchen with a table and a couple of old chairs separating his room from mine, and a bathroom and shower off to the side.

On the move-in day, I sat in the kitchen and sipped tea while Celine squeezed out half a tube of Kewpie mayonnaise from the fridge onto a burned piece of toast, and I realized there was a lot I didn’t know about this guy.

A couple of weeks later, I invited a lady friend round, and when she left, Celine, drunk, with eyes rolling under the kitchen light, explained to me his Catholic upbringing.

“For every man, there is ONLY ONE WOMAN!” he bellowed, before departing to his bedroom, slamming the door.

Another night he stumbled in and tried to break my door in,  so from that point on, I kept an empty wine bottle by the bed.

Occasionally he’d get home and slur that I shouldn’t open the front door for ANY reason before passing out in his room. One night, a taxi driver knocked hard on the door and barked through the letterbox demanding an unpaid fare. He banged for about five minutes, then it went quiet and I heard him drive off.

It happened again two weeks later – knocking, followed by silence, and I soon got back to sleep, only to be awoken again by the static of a loudspeaker outside announcing something formally in Japanese. There was a sharp grating sound next, followed by my curtain being pulled back, and in the moonlight I saw three riot police in body armor, with batons and shields held up, charging through my window. I jumped out of bed, ran over to Celine’s room and booted him awake. We then walked back into the kitchen where the cops had congregated, their shields and batons resting against the chairs. One of them walked over to the front door, unlatched it, and a detective in a smart suit walked in. He came towards me faster than I’d have liked so I pointed at Celine whom he started shouting at instead. The taxi driver came in next, started barking too. It then went quiet and we stood in our boxer shorts awaiting their next move. They made Celine get down on his knees, apologize to the taxi driver and bow until his head touched the floor, and it was funny seeing him down there. I lent him the cash, he paid the fare. The driver walked out, followed by the detective, and finally the three police. The door gently shut behind them and I went back to bed.

I moved out of the room a couple of months later but still bumped into Celine at the bar. The last time we met, he’d ‘knocked up a one night stand’ – his words not mine – and was unemployed. He left the country after that (once his mother had wired him the money for the flight) and well, I’m thinking Japan doesn’t miss the guy.

He ended up joining the army which seemed like a good fit.

A Stranger Inside Tokyo